The object of the game is to direct dice to their homes one by one by crossing a busy road full of speeding dice.

The rules are written here, or they can be downloaded using the link. The .pdf contains images showing how moves are made as well as a template board. You can also download the board separately if preferred.

Like any of my print & play's it was thought up pretty quick and hasn't received a whole lot of testing. It did feel quite fun though, so I hope you enjoy it, or it makes enough sense that you can tweak it into something you do enjoy!

It is best played with at least two players and a good supply of D6 dice.

The  board is an 8x8 grid.  You can print it from the included files or draw your own version:
- There is a central 6x6 road space.
- Starting row (A)
- Home row (B)
- Side columns can be used for queuing traffic.

Each turn the Navigators will attempt to move their dice closer to Home whilst trying to avoid the oncoming traffic.

The Traffic Controller starts with a handful of 6 dice. Each turn they roll however many dice remain in their hand. These dice are used to build traffic.

- Dice can be placed on the queuing space of the matching row.
- Arrows indicate which way the traffic travels in that row and traffic should be queued ready to move in the direction for that row.
- Only one row can be added to each turn.
- If multiple dice have the same value a longer piece of traffic can be created.
- Longer pieces of traffic are queued off the board.
- The Traffic Controller does not have to add any dice to the board if they wish.

Next the Navigator can choose a starting space anywhere along the starting row.

They place the dice they are trying to get across the road, in this space. This is their crossing dice.

Next the Navigator rolls another dice.

- If the value of this dice matches or is within 1 digit of the space they are in within the row - then the Navigator can move the crossing dice to any of the 8 adjacent spaces. (This excludes the queuing columns.)

- If the value of this dice is more than 1 digit different then the crossing dice must simply move one space forwards.

If traffic moves completely off the road spaces the Traffic Controller may choose to add those dice to their hand or queue the traffic again at the beginning of that row.

If the traffic dice collides with a crossing dice then the Navigator has failed and are the crossing dice is removed from the board.

This completes the first round.

To continue, simply repeat the sequence (ignoring the part where the Navigator chooses a starting space - unless they are playing with multiple crossing dice.)

The Navigator scores a point for each dice they successfully get to the home row.

The Traffic Controller scores a point for each dice they squash!

- traffic can be placed in the same row on subsequent turns. This can result in a longer chain of traffic. As it reaches the end of the row, treat it as the separate pieces of traffic it was initially played as. Do not wait for the complete chain to be off the board before queuing again/returning to hand. Using different coloured dice helps with this!

- A row shouldn't have more than four spaces filled with traffic. This excludes queuing traffic.

- If traffic is moving faster than the traffic ahead of it then it will move to the closest available space and then be treated as moving the same as the lead piece of traffic.

- Allow the Traffic Controller to stack dice. Instead of lengthening a piece of traffic when multiple dice can be played, stack on top. For each stacked dice increase the number of spaces that the traffic moves.

Increasing the traffic dice quickly ramps up the difficulty so tweak it until it's fun.

- If it’s too difficult allow the Navigator to decide the direction of the traffic rows.

- Instead of allowing traffic to slow down, let it collide. A collision stops the affected traffic pieces for one complete turn and then they are returned to the Traffic Controllers hand.

- It’s easy to increase the number of Navigators. Just decide if you want to allow crossing dice to occupy the same space or not.
- If you are playing with additional Traffic Controllers perhaps keep a stricter limit on the amount of dice they can pick up. 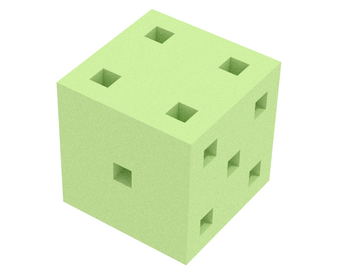 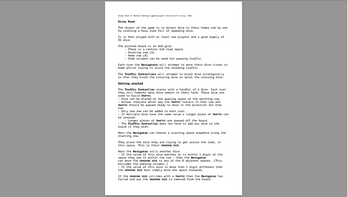 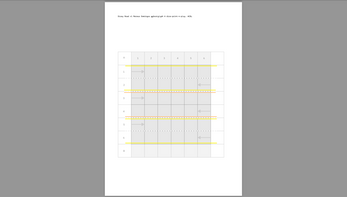 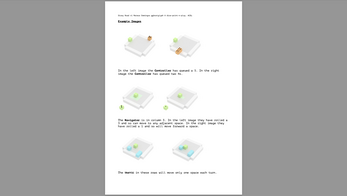